During the condition of Acid Reflux, the stomach acid contents flow back into the esophagus, causing inflammation or irritation in the lining of esophagus and this inflammation is known as Esophagitis. The inflammation damages the tissues of esophagus, a muscular tube that carries food from your throat to your stomach. It can be painful and makes swallowing difficult for you. When this inflammation becomes severe then ulcers start developing in esophagus and if this condition is left untreated then it leads to a more complicated condition, which is called Stricture or narrowing of esophagus. Only a timely diagnosis and a proper Esophagitis treatment plan can cure it and prevent the long-term complications.

For a better understanding of Esophagitis, let’s see the symptoms, causes, risk factors, complications, diagnosis and treatment of Esophagitis:

WHAT ARE THE SIGNS AND SYMPTOMS OF ESOPHAGITIS?

Common signs and symptoms of the disease include:

Very young children who can’t explain their discomfort or pain have the most common symptom of Esophagitis, which is feeding difficulties.

IMMEDIATELY CALL THE DOCTOR OR SEEK EMERGENCY CARE IF YOU EXPERIENCE BELOW CONDITIONS: 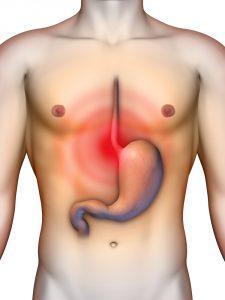 The disorder is generally categorized according to the particular condition that causes it. While in some cases, more than one factor involve in causing the problem. Let’s see the four types of the disorder and their causes:

Eosinophils are white blood cells that play an important role in allergic reactions. In Eosinophilic Esophigitis, these white blood cells get in high concentration in the esophagus in response to an allergy-causing agent or allergen or acid reflux or both. People having this type are allergic to one or more foods and the common foods causing the problem are eggs, milk, wheat, beans, peanuts, soya, beef and rye. Inhaled allergens such as pollens may also cause this type in some cases.

This type is caused by Gastroesophageal Reflux Disease (GERD), a condition in which stomach acidic contents repeatedly reflux back into the esophagus, causing irritation and inflammation in the esophagus.

This type is caused by oral medications which you take with little or no water, causing these medicines themselves or their residue to remain in contact with the lining of esophagus and damaging its issues. The medicines may include various pain relievers or antibiotics.

This type is very rare and it can be caused by viruses, bacteria, fungi or parasites that cause infection in the tissues of the esophagus. It is very common in people with weak immune system, such as people with AIDS/HIV, Cancer or Diabetes.

WHAT ARE THE RISK FACTORS FOR ESOPHAGITIS?

The risk factors vary depending on the specific Esophagitis cause. Some common risk factors include:
Acid reflux or GERD

WHAT ARE THE POTENTIAL COMPLICATIONS OF ESOPHAGITIS?

If left untreated, the disease can cause changes in the structure and function of esophagus. These complications include:

HOW IS ESOPHAGITIS DIAGNOSED?

Barium X-ray: It is an X-ray of your throat and esophagus. Before performing the test, you drink a barium solution or take a barium pill. The compound barium coats the lining of esophagus and the organ can be visible. It helps in identifying structural changes in esophagus.

HOW ESOPHAGITIS IS TREATED?

The treatments for Esophagitis aim to lessen the symptoms, manage the complications and treat the underlying cause of the disorder. The treatment options vary depending on the specific cause of disorder. Here, is a brief overview of treatments according to the causes of the disease:

The treatment option includes avoiding the allergen and reducing allergic reaction through medications. These medications include proton pump inhibitors and inhaled steroids which act to manage the asthma. The doctor also recommends you to eliminate certain food allergens from your diet.

The doctor recommends you to avoid the drug that is creating problem and take alternative medicine or a liquid version of medicine. You can also reduce the risk of the disorder with better pill taking habits, such as, drink one whole glass of water while taking pill and sit or stand for at least 30 minutes after taking pill.

The doctor prescribes medication to treat the viral, bacterial, parasitic or fungal infection that is causing the disorder.

If you’re experiencing any of the symptoms of Esophagitis then it is highly recommended to consult a board certified physician for timely diagnosis and treatment of the disorder. The physicians at GI Endoscopy Practice are highly accomplished and capable enough to properly diagnose the exact cause of the disease through advanced tests and then devise a proper treatment plan tailored according to your needs. They will take time to listen you, to find answers to your problem and to provide you the best care.