Is your stomach starts acting up? Maybe you ate something wrong that your stomach didn’t accept or maybe you’re under stress or maybe you have no idea why your stomach is feeling so crummy. While running back and forth for frequent loose bowel movements, you may be feeling that Diarrhea is most uncomfortable thing that can happen to you. Certain foods can worsen the symptoms of the condition and so in order to make yourself feel better, it’s important for you to know what foods to eat and what not to eat during the condition.

According to Peter Higgins, MD, assistant professor in gastroenterology in internal medicine department at University of Michigan, a patient should eat simple, plain foods during Diarrhea especially during the first 24 hours. He further added that the basic BRAT (bananas, rice, applesauce and toast) diet is the best option to start. Let’s see how this BRAT diet along with some other choices can help you during the condition and the foods that worsen the symptoms. 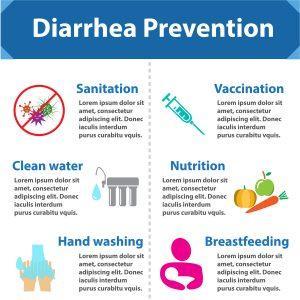 WHAT TO EAT WHEN YOU HAVE DIARRHEA?

The “B” in the BRAT diet stands for bananas, which are bland and easily digested by your upset stomach during the condition. They contain high levels of potassium that helps to replace electrolytes which may be lost during severe bouts. Bananas also contain a soluble fiber, called Pectin which helps to absorb liquid in the intestines while moving the stools smoothly. Another soluble fiber in bananas is Insulin, a prebiotic that promotes the growth of beneficial bacteria in large intestine while helping to treat the underlying problem causing the disease.

The “R” in the BRAT diet stands for plain white rice, which can be easily digested by your system giving a break to the frequent bowel movements. Rice is also known for their binding property which means that they can firm up the loose stools.

The “A” in the BRAT diet stands for applesauce which is also a good source of Pectin. The high levels of fiber in raw apples makes them rough for your intestinal system, but when they are cooked, your system can easily digest them. The sauce of cooked apples gives you many benefits from its nutrients and makes you feel better during the condition. However, if you have diagnosed with Irritable Bowel Syndrome (IBS) then applesauce might not be good for you, so consult your physician for further recommendation.

The “T” in the BRAT diet stands for toast of white bread as they are best to eat than whole wheat bread during the condition. Most of the fiber is removed from white bread making it easy to digest by the system and the large intestine. However, if you have IBS then you must eat gluten-free toast.

Now, we have moved beyond the BRAT diet and see how some other good choices of food that makes you feel comfortable:

Due to the low-fiber content in potatoes, they can be easily digested by your GI tract. Make sure to eat only pain boiled mashed potatoes.

Steamed white chicken is bland in its nature and a source of easily digestible proteins. This allows you to get some nutrients into your body during the condition.

Generally, it is recommended to avoid dairy products during the condition but yogurt is an exception because it contains gut-healing probiotics. Make sure to carefully read the labels while buying yogurt that it doesn’t contain high levels of sugar or artificial sweeteners because both these ingredients can cause loose stools and excessive intestinal gas. In case if you are lactose-intolerant then look for lactose-free varieties or its better to get recommendation from doctor.

You might have heard from your grandmother that chicken soup is best for whatever problem ails you especially during loose frequent stools. Chicken soup contains such nutrients and electrolytes that help to replace those that might have been lost during repeated severe bouts.

WHAT NOT TO EAT WHEN YOU HAVE DIARRHEA?

The fatty foods include fried foods and those that are greasy or served with gravy, which can aggravate the symptoms, so make sure to avoid them.

You become temporary sensitive to dairy products when you’re experiencing bouts. Avoid dairy products, such as butter, milk, ice-cream and cheese during the condition, even if the problem isn’t caused by them.

Make sure to avoid such beverages that cause you to lose fluids. Dr. Higgins says that “alcohol and caffeine acts as diuretics which mean that they are dehydrating and so should be avoided”.

Artificial sweeteners may have a laxative effect on the digestive system, so it’s better to stay away from sugar-less gum and candy, diet soft drinks and other sugar substitutes.

Fruits and vegetables are important for health and fitness. However when you have the problem, you must avoid certain foods that can cause excessive intestinal gas, such as, cabbage, broccoli, beans and cauliflower, until you will feel better.

Stay away from such foods that may be contaminated or stained including those foods that are out of refrigerator for long time or improperly stored foods. Avoid eating foods from restaurants or street foods until you feel better.

WHAT TO THINK ABOUT?

Remember that these food suggestions are intended to be your best choices when you are dealing with severe and chronic symptoms of Diarrhea. If you find that diet or simple remedies didn’t work or the symptoms are persistently becoming worse for more than 5-7 days or you start experiencing blood in stools and dehydration then immediately call the doctor right away.

You can consult board certified physicians at GI Endoscopy Practice in NJ as they have the expertise to evaluate your condition, diagnose the problem to determine whether it is caused by some other serious condition and then tailor a proper treatment plan. They are highly accomplished, well known, experienced, trained and determined to provide treatment in the distinguished manner.