Barrett’s Esophagus is a condition in which the normal tissue in the lining of esophagus, a tube connecting the mouth and the stomach, is abnormally replaced with different tissue, which is similar to the tissue lining the stomach or intestine. Barrett’s Esophagus is a rare condition not known to majority of people and it affects only 1.6 to 3 percent of the individuals. The people suffering from Barrett’s Esophagus are at a slightly increased risk of developing Esophageal Adenocarcinoma, which is a serious, potentially fatal and rare form of the cancer affecting esophagus. According to National Institute of Diabetes and Digestive and Kidney Diseases (NIDDK), the Esophageal Cancer affects only 0.5 percent of people having Barrett’s Esophagus each year. However, if you have been diagnosed with Barrett’s Esophagus then it’s very important to have routine examinations of your esophagus which help the doctor to discover precancerous and cancer cells at early stage and can be easily treated.

Barrett’s Esophagus is most commonly seen in people having long-term GERD, which stands for Gastroesophageal Reflux Disease, a condition in which the stomach acid repeatedly escapes to lower part of the esophagus causing abnormality, infection and pain.

Here, we give you a brief overview of Barrett’s Esophagus: its symptoms, diagnosis, and treatment and how it relates to the condition called GERD.

HOW DOES GERD RELATE TO BARRETT’S ESOPHAGUS? 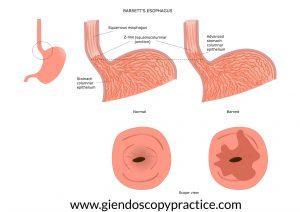 In order to understand the relation between GERD and Barrett’s Esophagus, it’s important to clearly know the functions of two vital organs of the human body: esophagus and stomach. When we swallow food or drink, it passes through the esophagus which is hollow, muscular tube running from our throat to the stomach. There is a ring of muscle, called Lower Esophageal Sphincter (LES), at the lower end of esophagus where it joins the stomach opening. The main function of LES is that it keeps the stomach contents from rising up into the esophagus. The stomach produces acid to digest the food and it also protects itself from the acid.

In the condition of GERD, the stomach contents start going backwards in the esophagus, an action known as acid reflux. Majority of patients with acid reflux don’t develop Barrett’s Esophagus. But in those patients who have frequent acid reflux, the normal cells in the lining of esophagus become abnormal and eventually replaced by the cells similar to the cells lining stomach and intestine, resulting in Barrett’s Esophagus.

WHAT ARE THE SYMPTOMS OF BARRETT’S ESOPHAGUS?

People who are diagnosed with the disease do not experience any symptoms at all that link with the change in the esophagus lining. However, people suffering from GERD experience symptoms, which include heartburn, sour, burning sensation at the back of the throat, chronic cough, nausea, chest pain, difficulty in swallowing and a hoarse voice.

WHAT ARE THE RISK FACTORS OF BARRETT’S ESOPHAGUS?

ACCORDING TO NIDDK, BETWEEN 5-10 PERCENT OF PATIENTS WITH GERD DEVELOP BARRETT’S ESOPHAGUS. THE PEOPLE WHO ARE AT HIGH RISK OF DEVELOPING THE DISEASE INCLUDE:

HOW IS BARRETT’S ESOPHAGUS DIAGNOSED?

As a patient doesn’t notice any symptoms of the disease, different medical exams are performed for diagnosis, which include upper endoscopy and biopsy. According to American Gastroenterological Association, people who have multiple risk factors of developing the disease should consult doctor for screening exams regularly.

Before starting the procedure of endoscopy, a doctor called gastroenterologist, gives a sedative to the patient making him/her to feel relax. During the procedure, the doctor inserts a long flexible tube with attached camera, down the throat into the esophagus. Once the tube is inserted into the esophagus, the doctor then visually examines the lining of esophagus. The Barrett’s Esophagus, if it’s there, can be visible on the camera; however a biopsy is still required to diagnose the disease. The doctor takes some sample of tissues of the esophagus lining that are examined in the laboratory for diagnosis. The appearance of normal and affected tissues is different from one another, normal tissues appear pale and glossy while affected tissues appear red and velvety.

HOW CAN BARRETT’S ESOPHAGUS BE TREATED?

Most important goal of doctors is to prevent or slow down the progress of the disease, which can be done by controlling and treating acid reflux. This can be done with medications and certain lifestyle changes. Let’s see how both treatment options can help the patients:

The doctor prescribes these medications according to the individual patient’s condition.
There are various treatments available, including surgery that specifically target advanced Barrett’s Esophagus or the abnormal tissues and precancerous or cancer condition. These include:

If you’ve been diagnosed with advanced Barrett’s Esophagus or precancerous or cancer condition then talk to your doctor about these treatment options so that you can have high chances of curing the disease.

If you are experiencing the symptoms of GERD or if you have questions about your risk of developing Barrett’s Esophagus then please consult the physician Dr. Bharat Dasani. He has vast experience in treating digestive system problems. He is highly recommended and well-known physician in New Jersey. The early diagnosis really helps to devise an effective treatment plan that cures the disease.